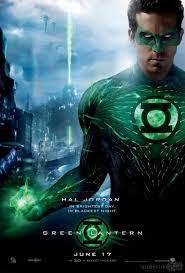 Green Lantern comics debuted in October 1959. The Green Lantern Corps was an intergalactic police force of 72,000, in which Hal Jordan patrolled Sector 2814, where Earth was located. After seeing his father die in a plane crash, Hal was immune to fear and became reckless, until he was abducted by a dying Abin Sur, whose green lantern and ring told him Hal was the fearless one to take his place. He joined the Justice League later but remained rebellious and often clashed with Batman. A comic called Green Lantern Corps debuted in 1961. There is supposed to be a movie with that title coming out soon.

In the movie: Billions of years ago, the Guardians of the Universe harnessed the green essence of willpower to create the Green Lantern Corps as a pan-galactic police force. They divided the universe into 3600 sectors and assigned one Green Lantern to each sector. One of these, an alien called Abin Sur (Temura Norrison) of Sector 2814, defeats the powerful Parallax (Clancy Brown) and imprisons him in the Lost Sector on the desolate planet Ryut. Now, Parallax has escaped by using the crash survivors on the planet, feeding on their fear. He mortally wounds Abin Sur, who escapes his clutches but crash lands on Earth. Dying, he commands his power ring to find a worthy successor.

A cocky test pilot named Hal Jordan (Ryan Reynolds) is chosen by the ring and transported to the crash site, where Abin Sur appoints him Green Lantern, telling him to take the ring, the lantern, and the oath. As soon as he does this, he is transported to the Green Lantern Corps on the distant planet of Oa. He meets and trains with veteran Corps members, Tomar-Re (Geoffrey Rush), Kilowog (Michael Clarke Duncan), and the Corps leader Thaal Sinestro (Mark Strong), who doesn’t think much of Hal Jordan. Training is so disheartening that Hal quits and returns to Earth, but he keeps the ring and the lantern.

A scientist named Hector Hammond (Peter Skarsgaard) is summoned by his father Senator Robert Hammond (Tim Robbins) to a secret government facility to perform an autopsy on Abin Sur’s body, observed by Amanda Walter (Angela Bassett). A piece of the Parallax within Abin Sur’s corpse enters Hector Hammond, giving him telepathic and telekinetic powers and quickly driving him insane. Understanding that he is only respected because of his father’s political power, he attempts to kill his father by a telekinetic attack on his helicopter, threatening everyone in a garden party.

Hal saves the senator and the guests, including his childhood sweetheart Carol Ferris (Blake Lively). Soon he visits her in his Green Lantern outfit and tells her all about it. She expresses sadness that he quit the Green Lantern Corps. Hammond uses telekinesis to burn his father alive. He also elevates Amanda Waller high above the floor and Hal saves her by creating a pool of water beneath her. In the process, he learns that Parallax himself is coming to Earth.

On the planet Oa, the guardians tell Sinestro that Parallax can control the yellow essence of fear, which has corrupted him. Sinestro asks the guardians to forge a ring of yellow power to counter Parallax, and he is willing to contribute to the destruction of the Earth in the process. Hal appears and warns that the use of fear will corrupt the Corps as well, but they do not believe him and he returns to Earth to battle Parallax on his own.

Hal saves Carol from Hammond. Parallax arrives, consumes Hammond, and wreaks havoc on Coast City. After a fierce battle, Hal lures Parallax from Earth and chases him across the solar system. Parallax is caught in Alpha Centauri’s gravitational pull and is destroyed. Hal escapes, the Green Lantern Corps congratulates him, and Sinestro tells him he is now responsible for his sector. After spending some time with Carol, he leaves. In a mid-credits scene, Sinestro takes the yellow ring and his suit and eyes turn yellow.

The film was directed by Martin Campbell from a script by Greg Berlanti and comic-book authors Michael Green and Marc Guggenheim, re-written by Michael Goldenberg, based on the Green Lantern comics of Denny O’Neil and Neal Adams in the Seventies and Dave Gibbons in the Eighties. It was released in 2011 to generally negative reviews from critics and fans, who were not enamored of the writing, CGI, comedy, and lack of faithfulness to the source material. It was supposed to start a DC character franchise but plans for a sequel were scrubbed and Man of Steel became the official start of the DC extended universe two years later.

Ryan Reynolds said that his later movie Deadpool always knew what it was but Green Lantern never did. Also, it fell victim to the Hollywood process in which the priorities are poster first, release date second, and script last. The CGI was not up to snuff because there were 30 different companies doing it. The weapons magically created by the ring don’t seem to be terribly imaginative. The hero seems bland and lifeless and the villains—some pretty great actors—seem underwhelming. Parallax looks like a big cloud instead of an all-powerful god--Can you say Galactus?—and, as often is the case, the studio was constantly interfering as it looked forward to sequels that would never happen. Please, Hollywood, one movie at a time.

Green Lantern has become such an in-joke that there was a scene in Ryan Reynold’s Deadpool 2 in which our hero travelled back in time to stop Ryan Reynolds from making Green Lantern. But there is supposed to be a Green Lantern Corps movie soon and a Green Lantern character is supposed to be in a future Justice League movie. I suppose the fan complaints are reasonable, though Parallax is impressively demonic and scary for a big black cloud. It’s not the best movie, not the best SF movie, not even the best DC movie. That would be Dark Knight, Aquaman, or anything with Wonder Woman in it.