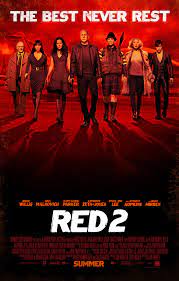 Three years after the events of RED, ex-CIA operative Frank Moses (Bruce Willis) is trying to lead a normal life with his girlfriend Sarah Ross (Mary-Louise Parker). His friend Marvin Boggs (John Malcovich), still paranoid, believes that enemies are still out to get them, but Frank doesn’t believe it. Until Marvin’s car explodes. Frank doesn’t believe that Marvin is dead, but Sarah convinces him to deliver a tearful eulogy at the funeral. Government agents interrogate Frank. Corrupt agent Jack Horton (Neal McDonough) and a team of military contractors ambush them and threaten to torture Sarah. Marvin, of course, turns up alive and well and helps Frank and Sarah escape.

It seems they are the targets of Operation Nightshade, a clandestine operation from the Cold War that tried to smuggle nuclear weapons into Russia. Horton convinces international spy agencies that Frank and his friends are terrorists. Frank’s old ally Victoria Winslow (Helen Mirren) tells him that she has been contracted by MI6 to kill them, and a certain Han Cho-Bai (Byung-hun Lee) has also been hired. Frank, Marvin, and Sarah steal Han’s plane and fly to Paris in search of The Frog (David Thewliss). The Americans and Han pursue them. They are met by Katja Petrokovich (Catherine Zeta-Jones), an old flame of Frank’s, who is investigating Operation Nightshade as well. They interrogate the Frog and the jealous Sarah seduces him.

The Frog gives them the key to his security box, which Katja absconds with, but Marvin, suspicious as always, provided Katja a fake key for her to steal. Marvin, Frank, and Sarah search the box themselves and find documents pointing to physicist Doctor Edward Bailey (Anthony Hopkins) as the creator of the Nightshade Bomb. They learn that Bailey is still alive after 32 years in a maximum-security asylum for the criminally insane in London. Victoria helps fake their deaths and infiltrate the asylum. They find the mentally unstable Bailey and take him to a safe house, where he remembers where the bomb is.

It's in the Kremlin, in a suitcase, powered by red mercury. Katja stops them, but Victoria informs them that Bailey was in prison because he wanted to set off the bomb. He holds Frank at gunpoint and reveals that he made a deal to give the bomb to Horton. He kills Katja, frames Frank, and leaves with the bomb. Horton tries to double-cross him, but Bailey escapes to the Iranian embassy in London. Frank gets Han to join him in stopping Bailey’s fiendish plan.

Sarah seduces the Iranian ambassador and takes him hostage, Marvin poses as a defector, causing a diversion that allows the team to enter as plumbers. They locate the bomb but Bailey has killed Horton and triggered the bomb. Bailey takes Sarah hostage and flees to the plane. The others give chase. Frank boards the plane and Bailey forces him to leave with the bomb in the suitcase. But Frank has already taken it out of the case and hidden it in the plane. The plane explodes high in the sky. Frank, Marvin, and Sarah enjoy themselves in Caracas.

The film was based on the DC comic book series created by Warren Ellis and Cully Hamner. It was directed by Dean Parisot of Galaxy Quest fame, from a screenplay by the Hoeber Brothers. The music was by Alan Silvestri. It was filmed in Montreal to save money, and because the city could pretend to be multiple European cities. It made less money than RED and critics were not terribly impressed. Ernest Borgnine was unable to reprise his role as Henry the Record Keeper because he died before production began. In one scene, Helen Mirren claims to be the Queen of England. She played the Queen in four movies. The toilet facilities in Anthony Hopkins’ mental hospital quarters were the same as those in the prison cell in Silence of the Lambs. Critics and some fans criticized the movie as less polished and less funny than the first. I found it hilarious, frankly, especially Mary-Louise Parker and Helen Mirren.