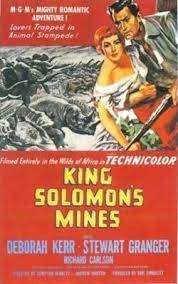 In Kenya, British East Africa at the time, a safari guide named Allan Quatermain (Stewart Granger) is persuaded by Elizabeth Curtis (Deborah Kerr) to organize a search for her husband, who disappeared in the unexplored interior while searching for the legendary King Solomon’s Mines. She has his map. They are joined by a tall mysterious native named Umbopa (Siriaque) and by Elizabeth’s brother John Goode (Richard Carlson). Allan has no use for women on Safari, but eventually, he and Elizabeth fall in love. Of course they do.

They come upon a man named Van Brun (Hugo Haas) living with a tribe, who had known Curtis. But Allan recognizes him as a fugitive from justice and they take him into custody so they can leave the village safely. He tries to shoot Allan but kills Allan’s right-hand man Khiva (Kimursi of the Kipsigi Tribe) instead. Allan kills Van Brun and they escape from the natives.

When they arrive at the place where King Solomon’s Mines are supposed to be, they meet people like Umbopa and learn that he is royalty, returned to dethrone the usurper King Twala (Baziga of the Watussi). The team is threatened by the tribal rivalry but the natives are cowed when john kills an attacker, using his last bullet.

Gagool (Sekaryongo), the king’s advisor, says he has seen Curtis and leads them to a cave where they find a treasure-trove of jewels and the skeleton of Elizabeth’s husband. Gagool sneaks away and triggers a booby trap that seals them in the cave. They escape by following an underground stream and turn up at Twala’s Kraal as Umbopa and his followers arrive. The two claimants to the throne duel to the death. Though Twala’s men cheat, Umbopa wins and sends his friends home with an escort.

The film was directed by Compton Bennett and Andrew Marton, based on the 1885 novel by H. Rider Haggard. Sam Zimbalist produced. The script was written by Helen Seutsch. The production was trucked into Africa 70,000 miles, using a convoy of Dodge trucks. There was, of course, no female lead in the Victorian novel, but like all film adaptations, a love-interest was created. In the silent version of the film, Paul Robeson received top billing for the role of Umbopa, but the character was less important in this version.

It was filmed in full Technicolor at Murchison Falls in Uganda, in Watusi land, volcano country, Stanleyville in the Belgian Congo, Tanganyika, and Rumuruti and Machakos in Kenya. There were also scenes filmed in the Slaughter Canyon Cave in Carlsbad Cavern National Park and Sitting Bull Falls. Deborah Kerr wrote DK in lipstick in Carlsbad Cavern, which has since been covered in limestone but is still visible and shown to tourists. Reviewers thought the film full of hokum but beautiful to behold. It was MGM’s most successful film of 1950 and made a tidy profit despite the expense of the remote shoot. It won Oscars for Best Cinematography and Best Film Editing and was nominated for Best Picture. It was the first Hollywood film shot in Africa since Trader Horn in 1931, and it produced stock footage for cheaper films for decades.

Deborah Kerr was the cause of laughter in the audience after cutting her own hair and then sunning herself in a perfectly coifed hairstyle. Stewart Granger and Deborah Kerr had an affair. She was given the role because she had lost that of Rose in The African Queen to Katherine Hepburn. Stewart Grainger spoke in decently pronounced Kiswahili. The villagers lives, including the Tutsi Lion Races, were an in-depth look at their indigenous culture. It was the first time that the Watusi had allowed themselves to be filmed. An elephant stampede caught on film was lost because the cast and crew ran for their lives, so it had to be staged with a trained elephant. Sadly, an elephant was shot legally because—believe it or not—there were too many elephants, but no one expected the other elephants to gather round and try to support it.

A remake in 1985 starred Richard Chamberlain and Sharon Stone, Herbert Lom and John Rhys-Davies. Sharon stone was in it by accident. The director wanted Kathleen Turner for the role after seeing her in Romancing the Stone, and he asked for That Stone Woman and got Sharon Stone. But she appeared in two sequels with Richard Chamberlain. The music was by Jerry Goldsmith, but the later films were not successful. Indiana Jones had happened and they were called Jones rip-offs, which they pretty much were. They got two Razzie awards. People are still looking for those mines.