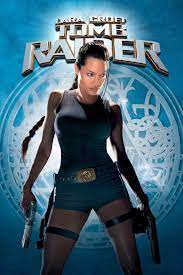 Lara Croft (Angelina Jolie) defeats a robot in an Egyptian tomb, but it is only a training exercise in her family manor, where she lives with her butler Hillary (Chris Barrie) and nerdy technical assistant Bryce (Noah Taylor). Meanwhile, in Venice, the Illuminati wish to take advantage of a planetary alignment to join two halves of an artifact called the Triangle, which process must be completed by the next solar eclipse and will give them power over time and life. Manfred Powell (Iain Glen) assures them that the artifact should be nearing completion.

Lara’s father, Lord Richard Croft (Jolie’s real father Jon Voight), missing and presumed dead, appears to Lara in a dream. She awakens to the sound of ticking in the manor and comes across a strange clock. On her way to consult with her father’s friend Wilson (Leslie Phillips), she runs into an American adventurer named Alex West (Daniel Craig). Lara shows the clock to Wilson and he sends her to Powell. He appears not to recognizer her photos of the clock.

That night, commandos raid the house, steal the clock, and bring it to Powell. The next morning, a letter from her father arrives and explains that the clock is the key to retrieving the two halves of the Triangle of Light, which can control Time. After its use turned out to be devastating, destroying an entire city, it was separated, half of it hidden in a tomb at Ankor, Cambodia, and the other in the ruined city on the Ukok Plateau, in Siberia. Croft begs Lara to find and destroy both pieces before the Illuminati can use their power.

In Cambodia, Lara finds Powell, who has hired West and assembled his commandos at the temple. West solves part of the puzzle and Powell is ready to use the clock at the moment of alignment, but Lara realizes they are mistaken and finds the necessary keyhole. With seconds left, she persuades Powell to throw her the clock. She unlocks the first part of the Triangle and the temple statues come to life and attack them. West, Powell, and his men take off with the clock and Lara defeats a six-armed guardian statue. She escapes with the first part.

In a time-crossing, she sees her father and he urges her to destroy the triangle. She manipulates time to save West and stab Powell, and that destroys the triangle. The tomb begins to collapse. Powell reveals that he murdered her father. She defeats him in a battle, kills Powell, retrieves her father’s pocket watch, and escapes the tomb. Back in the manor, she visits her father’s memorial and finds that Bryce has reprogrammed the training robot.

The film was directed by Simon West. It was an international co-production of the U.S., the U.K., Japan, and Germany. Critics did not much care for it, though many admired Jolie’s athletic performance. The script had gone through many drafts and writers and production was delayed several times. Many actresses were considered for the role of Lara—Jennifer Love Hewitt, Famke Janssen, Jennifer Lopez, Elizabeth Hurley, Ashley Judd, Sandra Bullock, Catherine Zeta-Jones, Diane Lane, Demi Moore, Kirsten Dunst, and Milla Jovovich, for example, but the one most people thought would get the role, for some reason, was the alleged actress Denise Richards. The casting of Jolie angered some fans, with most of the controversy being about the size of her breasts.

Then there were more problems, various people sacked, experts in patching up broken movies hired. It was cut down from 130 minutes, including Jolie’s nude scenes. She complained about that and thought Lara Croft was not sexy enough in the final cut. Nevertheless, it was a box-office success. Critics thought it even dumber than the game it was based on—monumentally silly, but wondrous to behold. Sounds like a lot of movies I’ve seen. Jolie was nominated for the Worst Actress Golden Raspberry but lost to Mariah Carey in Glitter. The fact was: Angelina Jolie was not well-known at the time and the director, Simon West, saw her as a genuinely tough babe.

Scenes of Lara Croft driving her Land Rover through the jungle required many re-takes because snakes kept dropping on her through the open roof. Apparently, Angelina Jolie was terrified. She loved Cambodia, nonetheless, moved there, helped with minefield clearance, and adopted her first son Maddox there. A British Special Forces instructor spent six months teaching her to fight and shoot. She did her own astonishing bungee-cord ballet off the manor-house balconies. She spoke in an English accent and Daniel Craig in an American accent. His gun was a Walther PPK. The movie has all the depth of a videogame, but Jolie is gorgeous, her athletics are breathtaking and it has the standard archaeological movie tropes—exotic landscapes, mystical nonsense, and over-the-top action.