INDIANA JONES AND THE KINGDOM OF THE CRYSTAL SKULL (2008) 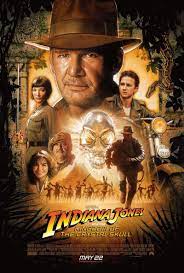 In 1957, KGB agents working under agent Irina Spalko (Cate Blanchett) kidnap Indiana Jones (Harrison Ford) and his partner George “Mac” MicHale (Ray Winston). The Soviets infiltrate a secret government warehouse in Nevada called Hangar 51 and force Indy to locate the mummified corpse from the Roswell UFO incident. After he gets his hands on the corpse, Mac reveals that he is a double agent for the KGB. Jones tries to steal the body and has to fight Spalko’s huge henchman Dovchenko (Igor Jijikine) so he can escape to a model town just before an atom bomb test. He survives in a lead-lined refrigerator and is eventually found, decontaminated, and interrogated by FBI agents. They are suspicious and he is put on leave of absence from Marshall College.

Motorcycle punk Mutt Williams (Shia Lebeouf) approaches Indy, telling him that Indy’s former colleague Professor Harold Oxley (John Hurt) found a crystal skull in Peru but has been kidnapped along with Mutt’s mother Marion Ravenwood (Karen Allen), who went to rescue him. Indy tells Mutt about the crystal skull and Mutt gives Indy a letter from his mother, Marion, that contains a riddle from Professor Oxley in an ancient language. Soviet agents try to capture them, but Indy and Mutt escape and follow the clues to Peru. Carvings on the wall of Oxley’s room at the psychiatric hospital lead them to the grave of the Conquistador Francisco de Orellana. The crystal skull is in the grave, but the KGB agents seize the pair and deliver them to the Soviet camp in the Amazon jungle. They find Oxley in bad mental condition and Marion. She confirms that Mutt is Indy’s son.

Irina Spalko believes the crystal skull is that of an alien lifeform with great psychic power. More such skulls will grant the Soviets the power to control the world with telepathy. Indy realizes that Oxley is trying to communicate through automatic writing and learns the route to Akator. As they are all being taken to the ancient city, Indy and his team escape from the KGB and Dovchenko is devoured by army ants. Mac reveals that he is a CIA double agent. After surviving going over three waterfalls in an amphibious vehicle, Indy and Oxley discover a skull-like rock formation that leads to Akator, not knowing that Mac is more KGB than CIA and is allowing the Soviets to track them.

Indy’s team escapes the city guardians, enters the temple, and finds it full of artifacts from many ancient civilizations. They realize that the aliens are archaeologists themselves, studying the history of mankind. They find 13 crystal skeletons, one missing its skull. Spalko arrives and replaces the skull and an overwhelming amount of knowledge is transferred to her mind, killing her. A portal to another dimension is opened, Mac and the Soviets are drawn in, but Indy and his team escape. A saucer rises from the crumbling city and the Amazon River pours into the hollow left behind. Later, Indy is reinstated and his wedding to Marion is witnessed by a recovered Oxley and his son Mutt.

The film, like its three prequels, was directed by Steven Spielberg. A batch of screenwriters—Jeb Stuart, Jeffrey Boam, Frank Darabont, Jeff Nathanson, and George Lucas—wrote drafts, but David Koepp’s ideas were most satisfactory. It was an homage to the Science fiction B-movies of the Fifties as the previous films were to the movie serials. Reviews from critics were generally positive, but audiences less so. Still, it was a financial success. It was the last of the Paramount Studios Indy Films. A fifth movie is to be released on June 30, 2023. The deal for five movies actually dates back to the late Seventies. The Ark of the Covenant is visible in a brief scene and armed guards were there to guard the valuable movie-prop. There was also a replica of the staff carried by Charlton Heston in The Ten Commandments.

John Williams did the score and said it was like finishing a letter you wrote 25 years ago. The film was simultaneously on best and worst lists. It was criticized by the Communist Party of the Russian Federation for obvious reasons and by the Peruvian and Mexican public because the Mayans were shown living in South America, which they did not. For a while, the phrase “jumping the shark” to mean going too far was replaced by “nuking the fridge.” Paramount wanted Indy’s whip to be computer generated because it was dangerous, but Harrison Ford insisted on wielding it for real. In a crash scene, an explosive landed in the truck-seat next to him but didn’t go off. Ford’s costume still fit him and he got to do more stunts because stunt technologies had gotten safer.

Cate Blanchet was thrilled to meet Ford in his Indiana regalia. She based her Irina Spalko on Rosa Klebb in From Russia with Love. Dmitri Diatchenko bulked up to 250 pounds to fight Indy. Ford accidentally punched him in the face and his humorous response tickled Spielberg so much that he enlarged his role. Shia LeBeouf signed on without reading the script. He watched all the Indy films, plus The Wild One, Rebel Without a Cause, and Blackboard Jungle. C3PO, R2D2, and E.T. appear briefly in every Indiana Jones film. The movie was delivered to theaters with a combination lock and the combination divulged on the day of the first showing.