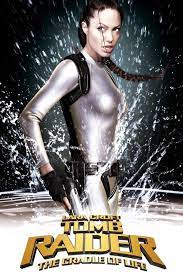 On the island of Santorini, Greece, an earthquake uncovers the Luna Temple, which was built by Alexander the Great. Among the treasures therein is a glowing orb with an apparent code etched into it. Lara Croft (Angelina Jolie) and her team discover this orb but they are ambushed by the brothers Chen Lo and Xien Lo (Simon Yam and Terrance Yin), who are crime lords leading the Shay Ling Syndicate. They kill most of Lara’s team but she escapes with the medallion.

MI6 speaks to Lara on the subject of Pandora’s Box, an ancient object that is supposed to contain a deadly plague. The box is hidden in the Cradle of Life and can only be found with a magical sphere that functions as a map. The sphere is the orb that was stolen by Chen Lo, who plans to sell it to Doctor Jonathan Reiss (Ciaran Hinds), a scientist and businessman who is now a bio-weapon arms dealer. Lara agrees to help MI6, if they will release her former lover, Terry Sheridan (Gerard Butler), who knows Chen Lo’s criminal operation well. Together, they infiltrate Chen Lo’s lair, where he is smuggling terracotta soldiers. Lara defeats him in a fight and learns that the orb is in Shanghai. There, she discovers that Xien Lo is trying to turn the orb over to Reiss, but Reiss betrays Xien and executes him. However, Lara manages to put a tracker on the crate containing the orb.

Lara and Terry find the orb in a lab in Hong Kong but Lara is captured by Reiss and his men. Reiss reveals that he intends to release the plague and save only those he deems worthy. Before he can kill Lara, Terry saves her and they grab the orb before taking off in wingsuits. Lara uses the orb to discover the location of the Cradle of Life in Kenya, near Mount Kilimanjaro. She sends information to Bryce (Noah Taylor) back at Croft Manor, but Reiss and his men enter the mansion and capture him and her butler Hillary (Chris Barrie). Lara travels to Kenya and meets her long-time friend Kosa (Djimon Hounsou). A local chief tells them the Cradle of Life is in a crater protected by Shadow Guardians.

Reiss’ men ambush their expedition on the way and kill the tribesmen. Lara has to surrender to the odds. Reiss forces her to lead him to the Cradle of Life. The Shadow Guardians come out of the trees and the ground and attack them, killing most of Reiss’ men, but Lara finds the keyhole and drops the orb into it. Lara and Reiss are drawn into a crystal labyrinth where the laws of physics do not apply. Inside is a pool of corrosive black acid in which the box floats. Terry arrives, frees the hostages, and finds Lara. She battles Reiss and he succeeds in getting his gun. He is about to shoot her, dump her in the acid, and take Pandora’s Box, but Terry distracts him and saves Lara. It is Reiss who is knocked into the acid pool and dissolved. Then Terry decides to take the box himself and sell it. She shoots him, returns the box where it belongs, and leaves.

The film was directed by Jan de Bont, based on the Tomb Raider video game. Like the first film, it was a co-production of the U.S., U.K., Germany and Japan. It was filmed in Hong Kong, Santorini, North Wales, and Kenya. Critics preferred it to the first film, particularly the action scenes and Jolie’s performance, but it did not make as much money as the first. It was still a financial success, however, and another sequel was planned, but Jolie would not join the cast and it was cancelled. A re-make of Tomb Raider was made in 2018, starring Alicia Vikander. Taste in female action-heroes had changed considerably by then. The music was by Alan Silvestri.

The film featured the new 2003 Jeep Wrangler Rubicon. Special Tomb Raider models of the vehicle were produced. The Rubicon was only on the screen for two minutes but apparently sold a lot of Jeeps. The director, Jan de Bont, hated working on the movie because the studio kept interfering, as did the makers of the videogame. Angelina Jolie, he said, had strong opinions on the film too, but he ended up liking her. Some said that the less-than-stellar financial performance of the film was because the videogame was rushed into production, full of bugs, and got poor reviews.

The big story, apparently, was that Angelina Jolie wore no bra-padding in the sequel and looked a lot better. As before, nude shots and at least one sex-scene was cut. The film was banned in China because the villains were Chinese and it seemed to imply the government could not control them. The scene in which Lara and Terry jump off a building wearing wingsuits was performed by the two men who invented them, one of whom has died since in a parachute accident. Lara’s complex rifle handling in one scene was the Queen Anne Salute used by the U.S. Army drill team.