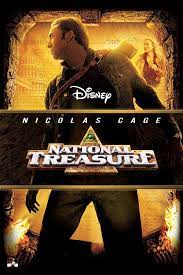 Treasure-hunter Benjamin Franklin Gates (young Hunter Gomez and later Nicolas Cage) is searching for the treasure hidden by the Knights Templar, the Founding Fathers, and the Freemasons that his grandfather John Adams Gates (Christopher Plummer) told him about when he was young. The secret had been passed on by their ancestor Charles Carroll (Jack Koenig) but Ben’s father Patrick (Jon Voight) doesn’t believe it. The clue is: “The secret lies with Charlotte.”

Thirty years later, Ben and his computer expert friend Riley Poole (Justin Bartha) head an expedition financed by Ian Howe (Sean Bean) to find the ship named Charlotte, lost in the arctic. They find a meerschaum pipe engraved with a hint that the next clue is on the Declaration of Independence. Ian wants to steal it from the National Archives and the party breaks up over the idea.

Ben and Riley report Ian to the FBI and to Doctor Abigail Chase (Diane Kruger) of the National Archives, but nobody believes them. Ben decides that the only way to save the Declaration is to steal it himself from the Archive Preservation Room during a gala. He copies Abigail’s fingerprints and gets his hands on the Declaration but is spotted by Ian. Ben tries to leave through the gift shop, but the clerk thinks he has a souvenir copy and he has to buy it. Abigail takes it away from him, but Ian kidnaps her. Ben and Riley rescue Abigail, having left a souvenir copy to fool Ian. FBI agent Peter Sandusky (Harvey Keitel) becomes suspicious of Ben.

They go to Patrick Gates’ house and study the Declaration, finding an Ottendorf Cypher written in invisible ink. It leads them to the Silence Dogood Letters of Benjamin Franklin, which Patrick had once owned but gave to the Franklin Institute. They pay a schoolboy to find them and decipher the codes, which reveal a message pointing to the belltower of Independence Hall in Philadelphia. With Ian trailing them, they find a hidden cache that contains a pair of Franklin Reading Glasses with multiple-colored lenses. Using that to read the back of the Declaration of Independence, they are sent on to Trinity Church.

Ian’s goons chase them through Philadelphia until Ben is arrested by the FBI. Ian takes the Declaration from Riley and Abigail, but she convinces Ian to help rescue Ben in exchange for the next clue. They get Ben away from the FBI at the U.S.S. Intrepid. Ian returns the Declaration and asks for the next clue, but when Ben resists, he shows that he has kidnapped Patrick as a hostage. They go to the Trinity Church, find an underground passage that seems to be a dead end, where a lone lantern seems to point to the Midnight Ride of Paul Revere, which sends Ian on to the Old North Church in Boston.

Ian traps Ben, Abigail, Riley, and Patrick in the chamber before he leaves for Boston, tricked by Ben into a wild goose chase. Ben finds the notch in their prison where the meerschaum pipe fits, which opens up a large room full of treasures, with a staircase to the surface. Ben contacts Sandusky of the FBI, who is a Freemason, and surrenders everything to him. Ian is arrested. Later, Ben and Abigail are an item, while Riley is sorry that Ben turned down the 10% finder’s fee on the treasure. But they are all rich anyway.

The film was directed by Jon Turteltaub, written by Jim Kouf and the Wibberleys, produced by Jerry Bruckheimer and distributed by Walt Disney Pictures. It received mixed reviews from critics, who praised the action, the actors, and the entertainment value, but thought the plot hard to believe. Really? An archaeology movie? A Nicolas Cage movie? All right, the plot is basically BS, but it’s pretty exciting BS. Most of it was filmed on location at the historic premises. Except for the fact that the ink on the original Declaration of Independence is not visible anymore, a lot of the historical details are actually true, though there is no connection between the Knights Templar and the Freemasons.

The movie beat Spongebob Squarepants at the box-office and actually made money. Enough in fact that a sequel—National Treasure: Book of Secrets—was made and a third film is still being discussed, along with a TV series with younger actors on Disney+. Ben, Patrick, and John were named after Founding Fathers and Abigail Chase was named after Samuel Chase, another signer of the document, and Abigail Adams. Cameras are not allowed in the National Archives because of the lights. The heroes entered Philadelphia via the Benjamin Franklin Bridge. Ben turned down a billion dollars in finder’s fees but took fifty million. Riley is driving a Ferrari 360 Spyder, so it can’t be that bad.