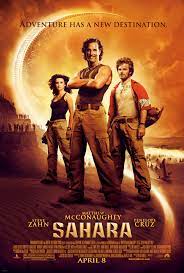 In 1865, near the end of the American Civil War, Richmond, Virginia, is in ruins. The CCS Texas ironclad ship is loaded with the last of the Confederacy’s gold and disappears into the Atlantic Ocean. In present day Mali, another civil war rages between the dictator General Kazim (Lennie James) and the Tuareg people. In Nigeria, WHO doctors Eva Rojas (Penelope Cruz) and Frank Hopper (Glynn Turman) are investigating a disease from Mali. A corrupt Tuareg named Zakara (Maurice Lee) tries to murder Eva, but she is rescued by Dirk Pitt (Matthew McConaughey) from the National Underwater and Marine Agency, NUMA.

Dirk obtains a gold Confederate coin discovered in the Niger River. To him, this is evidence that the CCS Texas somehow made it across the Atlantic and up the river to Mali. Most everybody thinks he’s crazy. Dirk borrows his boss Sandecker’s (William H. Macy) yacht to search for it, accompanied by his partner Al Giordino (Steve Zahn) and Rudi Gunn (Rainn Wilson) from NUMA. First, they transport Eva and Hopper to Mali to investigate the disease, and then continue up the Niger. Businessman Yves Massarde (Lambert Wilson) and dictator General Kazim try to prevent the doctors from discovering the source of the disease. Kazim sends soldiers to attack the yacht. Dirk, Al, and Rudi survive, but the yacht is destroyed. Rudi goes for help while Dirk and Al go to rescue the doctors.

Kazim’s men track down the doctors and kill Hopper, but Dirk and Al rescue Eva. Then they are captured by the Tuareg insurgents. Their leader Modibo (Paulin Fudouop) shows Eva that his people are dying from the disease she is investigating. She finds the toxins in the water but has no treatment. Al finds a painting in a cave showing the Texas, and believes it became stranded when the river dried up, but the water may still flow underground.

Following the riverbed, they come upon Massarde’s solar plant, which is the source of the contamination. The chemicals are headed for the ocean, where they will be spread all over the world. The US will not intervene in a foreign civil war. Our heroes are captured by Massarde and Zakara, who keep Eva and send Dirk and Al in a truck to Kazim. They escape in the middle of the desert, rebuild a wrecked plane into a land-yacht, and cross the desert. Dirk and Al  return to the plant with Modibo’s help. Massarde plans to conceal the waste by blowing it up with explosives. Afraid the explosion will only make the situation worse, Al goes to remove the explosives and Dirk tries to rescue Eva. Dirk kills Zakara after a vicious battle, but Massarde escapes by helicopter. Al neutralizes the explosives.

They leave the plant in an antique Voisin C-28 car and Kazim chases after them in an attack helicopter, followed by his army. Explosions in the riverbed reveal the wreckage of the Texas. They hide in the ship and take down Kazim’s copter with its cannon. It still works? Modibo arrives with his Tuaregs, ending the civil war. The plant is shut down, the source of the toxic waste is neutralized, and Sandecker agrees to work for the US government. The gold from the Texas, technically the property of the extinct Confederacy, is left with the Modibo people.

The film was directed by Breck Eisner based on the novel by Clive Cussler. It was shot in Morocco and the U.K. The budget went to hell and it lost money through lawsuits. It is often listed among the biggest box-office failures of all time. Also, there were bribes paid to the Morocco government, which is illegal. Nobody had a heart for the planned sequels. Critics called the plot preposterous and the movie mindless. The legal wrangling lasted ten years and nobody made any money but the lawyers.

There were three years of production delays before they even started filming. A full-scale model of the Texas was built, then dismantled and shipped to Morocco. A $250,000 camera was run over by a boat. Penelope Cruz’s hairstylist was paid a quarter million dollars. Two million dollars was spent on a plane crash that lasted 46 seconds on the screen and then was cut out entirely. Clive Cussler fought tooth and nail with everyone over changes to his book. Some theater chains decided not to show the film because the writer and the producer were busy suing each other. There were dust-storms and swarms of locusts and goats that peed themselves and those around them every time they got scared. The series of Dirk Pitt movies that Clive Cussler hoped for never happened, but that’s partly his fault.

The camel wrangler played several roles in the film because he was the only one who could jump from a camel onto a railcar, though the cast had to learn how to ride a camel at full gallop next to a moving train. Matthew McConaughey tried to do all his own stunts until the insurance company put its foot down. He had been to Morocco before, travelling up the river and across the desert on vacation, so he had a great time. After all this, is the movie any good? I don’t ask if it’s believable, which it mostly isn’t, because Archaeology movies in general tend to strain credulity. I mean: are the characters likable and their adventures exciting? Well, McConaughey is charming as usual, even with his shirt on, Penelope Cruz is always watchable, and Steve Zahn, the comic relief, is only mildly irritating and amazingly competent for a sidekick. It’s not Indiana Jones, but it’s  full of action and  goes down okay with the popcorn.