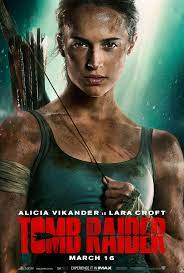 After her father, Lord Richard Croft (Dominic West) disappears, Lara Croft (Alicia Vikander) works as a bicycle courier. She is arrested after an accident, and Richard’s business partner (Ana Miller (Kirsten Scott Thomas) posts her bail. She urges Lara to accept her father’s inheritance though she is sure he’s still alive, because otherwise the estate of Croft Manor could be sold off. She accepts reluctantly, but in her father’s tomb she finds a video message from him concerning Himiko, the mysterious Queen of Yamatai, who was supposed to have power over life and death. He tells her to destroy his research, but she takes this as a challenge.

As the inheritance is held up, she pawns the jade pendant her father gave her. She travels to Hong Kong and hires Lu Ren (Daniel Wu), captain of the Endurance, to sail across the Devil’s Sea to the island of Yamatai. The ship capsizes in a storm and she is washed ashore unconscious. When she awakes, she finds Mathias Vogel (Walton Goggins), her father’s rival from the Trinity Organization, which seeks to harness the power of Himiko. He takes Lara prisoner and tells her that he killed her father. He uses Lara and Lu in his slave workforce, but she manages to escape.

She survives the rapids and the destruction of an old wartime airplane wreck and kills a Trinity guard. She trails a mysterious figure in the jungle and discovers that it is her father, alive, though not well. He stayed on the island just to keep Lara from searching for the dangerous tomb. Despite his wishes, she sets off to rob Matthias of his satellite phone. She contacts Lu and the slave force stages a revolt to allow her to sneak into camp and take the phone. Richard makes his way to Himiko’s tomb but is captured by Mathias, who forces Lara to open the tomb.

They pass a series of booby traps and find Himiko’s sarcophagus. When a Trinity soldier touches the body, he becomes a zombie-like creature. Lara realizes that Himiko was a carrier of a deadly virus. Trinity wants to create—you guessed it—a bioweapon. Unable to touch the body, Matthias cuts a finger off the corpse and seals it in a pouch. Lara and Richard overcome the soldiers, but Matthias escapes and Richard is infected. He proposes to die destroying the tomb. Lara battles Matthias and kicks him off a ledge. She escapes the collapsing tomb, hijacks a Trinity helicopter with the other slaves and flees the island. Back in London, she takes over the company and learns that Trinity’s dummy corporation front is part of Croft Holdings. She buys back her pendant and purchases matching Heckler and Koch USP handguns.

The film, directed by Norwegian Roar Uthang, from a screenplay by Geneva Robertson-Dworet and Alastair Siddons, from a story by Evan Daugherty and Robertson-Dworet, was based on the 2013 video game. It received mixed reviews from critics, many liking the action, grittiness, and realistic tone. Some liked Alicia Vikander as Lara Croft, and others did not. A sequel was planned but was cancelled after MGM’s rights to Tomb Raider expired. It was largely a victim of Covid delays. There was a Barbie Doll likeness of Vikander as Lara Croft designed by doll-designer Bill Greening. The film was released in competition with Black Panther and did not make money at first, but is now doing so, mostly because of video.

Alicia Vikander put on twelve pounds of muscle for the role and did most of her own stunts. She is nothing like the sleek and sensual Angelina Jolie as Lara Croft, but with her steely gaze and washboard abs, she is still damned attractive. She trained with Duncan Airlie James, six-time kickboxing champion, and with Magnus Lyndback, who trained Alexander Skarsgard for the role of Tarzan. Probably the most amazing scene is that aboard a crashed Mitsubishi G3m from World War II as it comes apart beneath her on the edge of a waterfall.