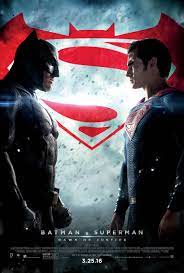 Bruce Wayne (Ben Affleck) recalls running from his parents’ funeral and falling in a cave where he is saved by a vortex of bats. Now, in present-day, 18 months after the city of Metropolis endures the battle between Superman and General Zod, Superman is a controversial figure, far from universally admired as a hero. Bruce has been Batman, protecting Gotham City for twenty years. He fears that Superman may be a threat to humanity.

For his part, Superman (Henry Cavill) looks askance at Batman’s dark vigilante persona, and as Clark Kent sets out to expose him in the pages of the Daily Planet. He learns that Russian weapons-seller Anatoli Knyazev (Callan Mulvey) is talking with the CEO of LexCorp, Lex Luthor (Jesse Eisenberg). The latter is trying to persuade Senator June Finch (Holly Hunter) to allow him to import kryptonite discovered after General Zod tried to terraform Earth. He says it could be a deterrent against future Kryptonian incursions. She declines, but he deals with her subordinate and gains access to Zod’s body and ship.

Bruce attends a gala at LexCorp to steal data from the company’s mainframe, but an antiquities dealer named Diana Prince (Gal Gadot) takes it from him but returns it when she is unable to access the data. Bruce dreams of a post-apocalyptic world where he leads rebellious forces against an evil Superman. He awakens when he hears a voice telling him that Lois Lane (Amy Adams) is the key and urges him to find the others. The now decrypted drive reveals Luthor’s files on Metahumans. One of them is Diana, in a picture from World War I. Wayne tells his assistant Alfred Pennyworth (Jeremy Irons) of his plans to steal the kryptonite to use against Superman.

Senator Finch leads a Congressional hearing investigating Superman’s battle against Zod. A bomb that Luthor smuggles in detonates, killing everyone but Superman. He blames himself and goes into exile. Batman breaks into LexCorp and steals the kryptonite. He builds a powered exoskeleton, a kryptonite grenade-launcher, and a kryptonite-tipped spear. Luthor is in the kryptonite ship accessing its database.

Luthor lures Superman by kidnapping Lois Lane and Clark’s adoptive mother Martha Kent (Diane Lane). He pushes Lois off the LexCorp building. Superman saves her and confronts Luthor, who admits that he is purposely pitting Superman and Batman against each other. He demands that Superman kill Batman in exchange for Martha’s life. Superman tries to enlist Batman’s help, but he attacks Superman with kryptonite gas. Just before Batman finishes off Superman, the latter begs Batman to save Martha. Martha was also Bruce Wayne’s mother’s name. This makes Batman pause in confusion and Lois arrives and explains. Wayne comes to his senses and sets out to save Martha. Superman recovers and confronts Luthor.

Luthor executes his backup plan, unleashing a giant monster genetically engineered from Zod’s body. Diana arrives and joins Batman and Superman in battling the creature. Superman stabs it with the kryptonite spear, but Superman dies of Kryptonite poisoning. Batman confronts Luthor in prison, warning him that he will always be watching. But Luthor gloats that Superman’s death leaves Earth open to alien threats. A memorial to Superman is held in Metropolis. Clark Kent is declared dead as well and both Bruce Wayne and Diana Prince attend his funeral in Smallville. Martha gives Lois an engagement ring from Clark. Bruce regrets having failed Superman and asks Diana to help him form a team of metahumans gleaned from Luthor’s files, to protect the world in Superman’s absence. As they leave, the dirt atop Clark’s coffin begins to levitate.

The film was directed by Zack Snyder, written by Chris Terrio and David S. Goyer. It was announced at the 2013 San Diego Comic-Con. Though it made a profit, it performed below expectations and received poor marks from critics. The idea is that the battle for Metropolis between Superman and Zod in the previous movie has the same existential impact as 9/11 in this world. Some said that Batman is the right-wing vigilante and Superman the left-wing crusader, and Lex Luthor the opportunistic oligarch pitting them against each other. Or Superman is the ultimate patriotic immigrant. Or that Batman is Pluto, the god of the underworld, and Superman is Apollo, the god of the sky. I’m not sure the film is strong enough to bear the weight of all this analysis.

Affleck was criticized for, basically, being Ben Affleck, and Jesse Eisenberg for being too young to play Lex Luthor. A young dot-com billionaire drunk on power? Imagine! Gal Godot was criticized for not being powerfully muscled like the later Wonder Woman in the comics. I’m sorry, Gal Godot looks like the perfect goddess in every way to me. Jason Momoa appears as Aquaman, Ezra Miller as the Flash, and Ray Fisher as Cyborg, making this Volume Two of the Justice League Origin Trilogy. What is wrong with this somewhat uneven movie, one wonders, that it received such virulent criticism? Well, it has three goals: 1) Fan service, 2) Sequel set-up, 3) Entertainment. If the first two make it tiresome, then it fails in the third. If the first two give you a thrill, you’ll enjoy it anyway. The rest is just online bitching, if you ask me.

Ben Affleck said this Batman was a little older, a little more world weary, a bit cynical and jaded. One of the buildings destroyed in Metropolis was his, and he knew people who died. Superman was not just the shining hero of earlier iterations. He is controversial. He is loved, but also feared and hated. Amy Adams said that Lois Lane is fearless. When you meet her and Clark, you know they have been in a relationship for a while. Jesse Eisenberg said that Lex Luthor is a narcissist of the first order, but troubled. Having so much power at a young age made him authoritarian. Jeremy Irons portrays Humphrey Pennyworth in a new way. He is supremely competent, can do anything from changing lightbulbs to blowing up bridges. Gal Gadot said Wonder Woman is all about compassion and truth and justice.

Batman has a voice modulator in his suit to lower Ben Affleck’s voice, yet not seem as phoney as Christian Bale’s voice sometimes sounded in the Dark Knight Trilogy. And it hides the voice of a famous billionaire whose voice would be recognized by many. Affleck worked out two hours a day and achieved eight per cent body fat for the role. Clark Kent’s glasses were made by Tom Davies, British maker of bespoke eyewear. The movie has Gotham City and Metropolis located across the bay from one another, like New York and New Jersey. The story that Amazon women had one breast removed to facilitate shooting a bow and arrow does not exist in classic literature and came from a recent historical novel.

A stained-glass window on the Wayne Family Crypt portrays an angel in blue clothing and a red cape hovering over a burned city. This was the first theatrical film to give credit to Bill Finger as co-creator of Batman. It is the 11th appearance of Batman on film. This Batman is based on the darker Frank Miller version in the comics. The phrase “Who watches the watchmen?” is heard in this movie as well as in The Watchmen. The scene in which Bruce Wayne hands down the body of Superman to Lois Lane and Wonder Woman reminds me of scenes I have seen on the walls of churches. When Ben Affleck was in a costume shop to buy a Batman costume for his son, he ran into Christian Bale doing the same thing, and asked him for his advice on the role. Bale said, “Make sure you can piss in the suit.”