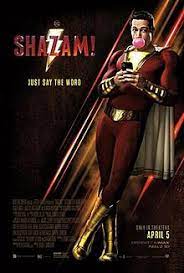 In upstate New York, in 1974, young Thaddeus Sivanna (Ethan Pugiotto and then Mark Strong) is riding in a car through a snowstorm. His abusive father (John Glover) and his brother Sid (Wayne Ward and then Landon Doak) are constantly harassing him. His Magic 8-ball transports him to the Rock of Eternity in another dimension. The ancient wizard known as Shazam has been searching for someone pure of heart on which to bestow his power, since the previous champion released the Seven Deadly Sins. The personalized Sins tempt Thaddeus with power if he will free them. The wizard finds Thaddeus unworthy and sends him back to the car, but there is an accident in which his father is paralyzed from the waist down. Thaddeus is blamed, but the Sins send him a message telling him to seek them out.

In present day Philadelphia, 14-year-old foster child Billy Batson (Asher Angel) keeps running away from foster homes to search for his birthmother. He is placed in the group home of Victor and Rosa Vasquez (Cooper Andrews and Maria Milars) with five other foster children: Mary Bromfield (Grace Fulton), Pedro Pena (Jovian Armand), Eugene Choi (Ian Chen), Darla Dudley (Faithe Herman), and Freddy Freeman (Jack Dylan Grazer), who is a big superhero fan. Sivanna finds his way back to the Rock of Eternity and merges with the Seven Deadly Sins. He uses his powers to kill his father, brother, and the whole Board of Directors of Sivanna Industries.

Billy defends the physically disabled Freddy from bullies at school and is chased into a subway, from which he is transported to the Rock of Eternity. The wizard chooses Billy to be his new champion by reciting the word SHAZAM and Billy is transformed into an adult superhero. The wizard vanishes, leaving his wizard staff behind. Billy takes Freddy into his confidence and Freddy helps him deal with his superhuman strength, near-invisibility, and manipulation of electricity. Saying SHAZAM again transforms him back into Billy Batson. Freddy posts viral videos of him and Billy starts skipping school. After he accidentally endangers and then saves a bus full of people, he and Freddy argue. Billy escapes by flying. He finds his birthmother and is heartbroken to learn that she no longer wants him in her life.

Sivanna discovers Billy’s identity and takes the other orphans hostage. Billy agrees to give him his powers to save them. They travel to the Rock of Eternity and use the wizard’s staff to transfer the powers, but the children attack Sivanna. Billy sees that Sivanna becomes weak when all the Seven Sins leave his body. When Sivanna unleashes the Sins on the crowd at a carnival, Billy shares his powers with the other orphans, creating adult superheroes like him. They battle the Sins and Billy defeats Sivanna. Billy and his friends put the Sins back in their prison and use the Rock of Eternity as their headquarters. As a superhero, he has lunch with his family and invites Superman to join them. In his cell, Sivanna is spoken to by a talking caterpillar.

The film was directed by David F. Sandberg from a screenplay by Henry Gayden and Darren Lemke. The film was delayed for several years. It was supposed to star Dwayne Johnson as the hero, then as the villain Black Adam, and then he was given his own movie. The film , which was largely made for laughs, received positive reviews. There was much controversy over who owned the name of Captain Marvel, since both Marvel and DC had had a character of that name since the Forties. In 1953, DC Comics sued Marvel Comics for copyright infringement and Marvel stopped using the name, though there was an alien Captain Mar-Vell who appeared in Amazing Spiderman Annual # 16 in the late Sixties. Eventually, DC took the name of Shazam and left Captain Marvel to Marvel Comics.

DC’s Captain Marvel first appeared in Whiz Comics Vol. 1 #2, Feb. 1940. The magic word SHAZAM stands for Solomon, Hercules, Atlas, Zeus, Achilles, and Mercury, and when spoken calls down their powers. He got into trouble when he insisted on returning the body of his defeated villain Black Adam to his home for burial and was harassed by three different Justice Leagues. He was corrupted by contact with Pandora’s box, then in the possession of Wonder Woman, and he ended up having to battle Superman. The Marvel family, his adopted siblings since the Forties, could partake of his powers. When the wizard Shazam died, Marvel took his place and his name. Captain Marvel appeared in Republic Pictures serial adventures in 1941.

The movie Shazam has been described as the movie Big with superpowers. When Shazam is trying to fly in the mall, a group of shoppers are in the background, ignoring him. They were crewmembers who were accidentally caught on camera, so they were given CGI shopping bags. The abandoned factory belongs to Ace Chemicals, and it was the place where the Joker was created. Of the Seven Deadly Sins, Wrath is brawny and aggressive, Pride has wings and horns, Greed has multiple arms, Gluttony is obese with an enormous mouth, Sloth is slow-moving, Lust has a long tongue, and Envy is small and puny. Frankly, the movie is aimed at a young audience and is not my cup of tea, though there are some amusing jokes.