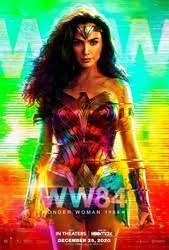 On the island of Themyscira, the young Diana (Lilly Aspell) competes athletically against adult Amazons. She is knocked off her horse, takes a shortcut and gets back on, but misses a checkpoint. Her aunt, General Antiope (Robin Wright), removes her from the race for cheating and her mother Queen Hippolyta (Connie Nielsen) advises patience. In 1984, Diana (Gal Gadot) is working at the Smithsonian in Washington as Diana Prince. A new museum employee, a nerdy geologist named Barbara Ann Minerva (Kristen Wiig) , is hardly noticed by her co-workers but Diana befriends her.

The FBI asks the museum to identify some stolen antiquities from a robbery that Wonder Woman foiled. Barbara and Diana notice that one of the artifacts, the Dreamstone, has a Latin inscription granting one wish. Jokingly, Barbara wishes to be like Diana, not knowing that she will be granted superpowers, while Diana wishes for the return of her dead lover Steve Trevor (Chris Pine). He is resurrected in another man’s body (Kristoffer Polana) in mirror reflections, and the lovers are reunited at a Smithsonian gala. Businessman Max Lord Lorenzo steals the Dreamstone, hoping to use it to save his failing oil company. He wishes to become the stone itself and gain its wish-granting powers. Every time he grants a wish, he can take what he wants from the wisher and it ends in worldwide chaos.

Diana discovers that the Dreamstone was created by Dolos or Mendacius, the God of Lies and the Duke of Deception. It grants wishes but exacts a terrible toll unless the stone is denounced or destroyed. Diana’s powers and Barbara’s humanity begin to diminish, but they will not renounce their wishes. Max visits the President at the White House, who wishes for more nuclear missiles and the world is soon at the brink of nuclear war. Max learns of a secret satellite system that can broadcast to anyone on Earth. He plans to broadcast wishes globally to obtain strength from the TV viewers and restore his failing health—not to mention impressing his young son. Diana and Steve confront him, but Barbara betrays Diana and escapes with Max on the Marine One helicopter.

Steve convinces Diana to renounce her wish and let him go, and her strength is restored. She puts on the Armor of Asteria, the greatest Amazon warrior, but Barbara is now an apex predator, a humanoid cheetah, based on a recurring foe in the comics. After a brutal fight, Diana electrocutes Barbara and pulls her out of the water. She uses her Lasso of Truth on Max to tell the world what he has done. Everyone renounces their wish. Then she shows Max his unhappy childhood and his son Alistair (Lucian Perez) who is searching frantically for his father. Max renounces his wish and joins his son. Barbara returns to normal. Diana meets the man whose body Steve inhabited, and in a mid-credit scene Asteria herself (Lynda Carter) appears.

The film was directed by Patty Jenkins, who had directed Wonder Woman, written by her, Geoff Johns, and Dave Callahan from a story by Johns and Jenkins. It was produced by Warner Brothers, Atlas Entertainment, and The Stone Quarry. Its opening was delayed several times because of Covid and finally released in 2020 in theaters, on the DC FanDome platform, and on HBO Max. Critics praised its escapist quality, Hans Zimmer’s music, and the direction, but as in many comic-book films, found fault with the plot. It failed to break even in theaters, though it was the most watched film on streaming platforms. In fact, many people subscribed to HBO Max just to see it. Some criticized the inhabiting of a man’s body without consent and forcing him to have sex with Wonder Woman.

12-year-old Lilly Aspell, playing young Diana, did all her stunts herself because she did them better than her stunt doubles. Asteria’s golden armor is based on armor pictured in the Alex Ross Wonder Woman comic Kingdom Come, but he wasn’t paid for it. Costume designer Lindy Hemming based Diana’s wardrobe on that of Brooke Shields, who is the same height and build as Gal Gadot. Stuart Milligan plays the President. He played Richard Nixon on Doctor Who in 1987. Diana’s apartment is in the Watergate Complex. The next film in the series is supposed to take place in the present time. The plot seems a little fanciful and I would have liked a lot more of the wonderful Cheetah, but as usual you can’t take your eyes off Gal Gadot and Wonder Woman’s fight-scenes are glorious. Love her fight-scene music.