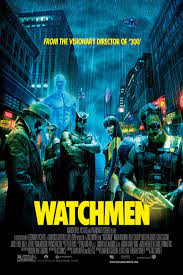 The Watchman comic debuted in September 1986 and ran to October 1987. The film follows the trajectory of the comics quite closely. After the movie, in 2012-2013, prequel adventures concerning their predecessors The Minuteman and Ozymandias appeared.

In the film, in the United States of an alternate Earth, beginning in 1939, a team of costumed crime-fighters is created. At first called the Minutemen, they become the Watchmen during the Cold War. Doctor Jon Osterman (Billy Crudup), after seeming to die in an Intrinsic Field Generator accident, becomes the glowing blue Doctor Manhattan. The government uses his powers to win the Vietnam War and defeat the Soviet Union.

The Comedian (Jeffrey Dean Morgan) is responsible for the assassination of President Kennedy and the Watergate Coverup, in which he kills Woodward and Bernstein, helping to elect Richard Nixon for a third term. (Mister Trump, eat your heart out.) Anti-vigilante sentiment sweeps the nation during a police strike and the Keene Act is passed against “costumed adventuring.” Nite Owl II (Patrick Wilson) and Silk Spectre II (Malin Ackerman) retire, Doctor Manhattan and the Comedian become government agents, and Rorschach (Jackie Earle Haley) continues to work outside the law. He discovers that the Comedian was murdered, but Manhattan, Nite Owl, and Ozymandias (Matthew Goode) do not believe him.

Accused of causing cancer in those close to him, Manhattan exiles himself to Mars. With him out of the picture, the Soviets invade Afghanistan. Ozymandias survives an assassination attempt and Rorschach is framed for it. His backstory is explained to the prison psychiatrist. Silk Spectre and Nite Owl come out of retirement to help him break out of prison. Doctor Manhattan probes Silk Spectre’s memories and finds she was the Comedian’s daughter, her mother, the first Silk Spectre (Carla Gugino), having had an affair with him. The first Nite Owl (Stephen McHattie), now just a mechanic, is murdered by those thinking he is the second.

Rorschach and Nite Owl discover that Ozymandias is behind the conspiracy. They confront him at his Antarctic retreat and he admits everything. He intended to unify the US and the USSR by detonating nuclear reactors all over the world so it would look like Doctor Manhattan’s work. They are unable to stop him and Manhattan becomes public enemy number one on Earth. Silk Spectre and Manhattan return to a devastated New York City. The US and USSR do unite and, to preserve the peace, Manhattan agrees to take the blame. Rorschach refuses to agree to the lie and demands that Manhattan kill him. He does so and departs to another galaxy. Night Owl and Silk Spectre return to continue fighting crime in New York. A newspaper called the New Frontiersman publishes Rorschach’s journal.

The film was directed by Zack Snyder from a screenplay by David Hayter and Alex Tse, based on the 1986-1987 DC comic created by illustrator Dave Gibbons and written by Alan Moore. It languished in development Hell as various directors bailed out, including Terry Gilliam, who called it unfilmable. David Hayter, Darren Aranofsky, and Paul Greenglass were attached, but it was cancelled over budget disputes. Fox sued Warner Brothers. Finally, it was released in 2009 and polarized both fans and critics. A 3-hour and 35-minute director’s cut was preferred to the theatrical release. If there’s anybody who knows how to make a short story long, it’s Zack Snyder.

Other superheroes who appeared in minor roles were Dollar Bill (Dan Payne), Mothman (Niall Matter), The Silhouette (Apollonia Vanova), Hooded Justice (Glenn Ennis), and Captain Metropolis (Daniel Scheelar). Matt Frewer played a villain named Moloch, and Danny Woodburn the villainous dwarf Big Figure. Other actors impersonated Richard Nixon, Henry Kissinger, Annie Leibowitz, and Dick Cavett. It was nominated for seven Saturns and thirteen Screams. Naturally, it is now a cult favorite. In 2019, there was a Watchmen series on HBO. All the American flags in the film have 51 stars, because in that reality Vietnam had become the 51st state. Jackie Earle Haley was the only actual Watchman Comic fan in the cast.

The phrase “Who will watch the watchman?” was written by the Roman poet Juvenal. Or by Aristotle. Take your pick. The film was disowned by the comic book author Alan Moore, as he had done for V for Vendetta and the League of Extraordinary Gentlemen. The scene in the War Room was inspired by the one in Doctor Strangelove. Malin Akerman, who is Swedish, had no problem appearing nude. There were 200 sets built and ten companies provided special effects. The movie is controversial among fans, but it is fascinating and impressive, the superheroes strange and unusual. I sincerely loved the glowing, naked Doctor Manhattan, and the constantly changing patterns on Rorschach’s face.