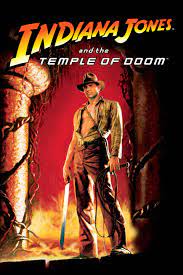 In 1935, a Shanghai crime boss named Lao Che (Roy Chiao, with his voice dubbed by Ron Taylor) tries to kill Indiana Jones (Harrison Ford), who escapes in a Ford Tri-Motor cargo plane with his orphan sidekick Short Round (Ke Huy Quan) and a singer from Club Obi-Wan, Willie Scott (Kate Capshaw). But the plane is owned by Lao Che. As the passengers sleep, the crew dump the fuel and parachute to safety, leaving the plane to crash in the Himalayas. Upon awakening and realizing their peril, the escapees bail out in an inflatable raft which slides down the snowy slopes and into a raging river. They drift to the village of Mayapore in northern India, where the villagers ask them to find the Shivalinga sacred stone taken from their shrine, along with all their children, by the evil Pankot Palace. Indie thinks he knows what the Sankara Stones are and agrees to help.

They are welcomed at the Pankot Palace and invited to a lavish and revolting banquet hosted by the young Maharajah (Raj Singh). They deny they are in any way connected to the deadly Thuggee cult, but Indie is attacked by an assassin that night. He finds a tunnel filled with booby traps and makes his way to the Thuggee temple, where the goddess Kali is worshipped with human sacrifice.

The Thuggee now have three of the five Sankara Stones and the enslaved children are searching for the other two, somewhere in the palace catacombs. If they have all five, their power will be godlike. Indy, Willie, and Shorty are captured. The high priest Mola Ram (Amrish Puri) forces Indy to drink a potion and enter a trance-like state. Willie is prepared for human sacrifice and Shorty is sent to the mines with the other children. Shorty escapes, frees Indy and the Maharajah. Indy saves Willie and grabs the stones. They fight and free the children.

They escape on a railroad mining cart careening through the tunnels, pursued by the much less lucky Thuggees and nearly washed out in a flood. They are ambushed by Mola Ram on a rope bridge over a river gorge alive with crocodiles. Indy cuts the bridge and they dangle over the river. Mola Ram and Indy fight and Indy calls on Shiva. The stones glow red hot and plunge into the river with Mola Ram, who is eaten by the crocodiles, but Indy catches a stone and is rescued by the British Indian Army, who arrest all the Thuggees. Indy, Willie, and Shorty return to the village of Mayapore with the lost stone and the stolen children.

The film was directed by Steven Spielberg and written by George Lucas as the prequel to Raiders of the Lost Ark, because Spielberg did not want to deal with the Nazis again. They were aided in writing the script by Willard Huyck and Gloria Katz, who had helped Lucas with American Graffiti. The film was a financial success but came under fire for its violence and darkness. It and Spielberg were largely responsible for changes to the film rating system. There was also criticism for Kate Capshaw’s Willie Scott, who constantly complains in a grating voice and becomes tiresome really fast. She was supposed to be completely different from Marion Ravenwood in Raiders, and she certainly was. Spielberg and Lucas attributed the meanness in the film to their personal moods following breakups.

The government of India found the script offensive, and I think it was, but the government demanded too much power over the script. So, it was filmed in Sri Lanka instead of India.  Perhaps the strangest part of the movie was the opening dance number a la Busby Berkeley. Capshaw learned to sing in Cantonese and dance, but the dress was too tight to dance in. It was made by Barbara Matera Ltd out of real 1920s and 1930s beads. Unfortunately, it was partially eaten by an elephant and had to be repaired, but costume designer Anthony Powell filed an insurance form with “Dress eaten by elephant.”

Harrison Ford hurt his back and did most of the movie in pain. He lay in a hospital bed between takes. Time has been kind in terms of public acceptance. It was called exciting, bizarre, goofy, romantic, silly, darkly violent, dumbed down, and like a ten-year-old boy trying to gross out his baby sister. Kate Capshaw herself called Willie a dumb blonde. But Steven Spielberg married her later. There was an Oscar for visual effects and a nomination for John Williams for the music. There were Saturn Award nominations for cinematography, editing, and sound. It was nominated for best fantasy film but lost to Ghostbusters.