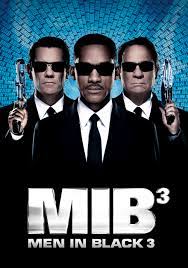 In 2012, the last Boglodite, called Boris the Animal (Jemaine Clement), escapes from a maximum-security prison on the Moon, seeking revenge on Agent K (Tommy Lee Jones) of the Men in Black, who shot off his arm and arrested him in 1969. He confronts K and his partner Agent J (Will Smith). J discovers that Agent K was responsible for the ArcNet, a shield which prevented the Boglodites from conquering Earth and led to the species’ extinction.

Boris travels back in time to 1969 to kill the young Agent K (Josh Brolin). With only J’s memory unaffected, no-one at the Men in Black agency remembers K, until Agent O (Emma Thompson) realizes there has been a fracture in the space-time continuum. With K gone, the ArcNet was never implemented, and Earth is helpless before the Boglodites.

Learning from the records, J knows that Boris will commit a murder at Coney Island in 1969. J travels to that time and place to kill Boris, but is arrested by young K, who is ready to neutralize his memory, but at the last minute decides to check out J’s theory. K and J end up at Andy Warhol’s (Bill Hader) Art Factory. Warhol is Agent W and sends them to the last Archanan, Griffin (Mochael Stulbarg), who can see all possible timelines. He flees from Boris but tells J and K where to meet him so he can give them the ArcNet. They meet Griffin at Shea Stadium, where Griffin is captured by Boris. J and K rescue him and secure the ArcNet. Young Boris escapes and the old Boris appears. They team up.

K takes the news of what Boris will do to him badly. He and J and Griffin use jetpacks to fly to Cape Canaveral to plug the ArcNet into the Apollo 11 rocket but are arrested. Griffin shows Colonel James Carrell Edwards (Mike Colter), J’s father, the future and he helps them get to the launch site. As they climb the launch tower, they are attacked by both Borises. J knocks Old Boris off the tower, K shoots young Boris’s arm off, knocking him off the tower and restoring the timeline. K attaches the ArcNet to the rocket and it is deployed.

Young Boris attacks K on the beach but the Colonel saves K, sacrificing himself. K kills Boris instead of arresting him, breaking the cycle. The Colonel’s son (Cayen Martin), who is J as a child, asks about his father and J tells him he is a hero. He realizes that K has been watching over him his whole life.

I must say that Josh Brolin as a young Tommy Lee Jones was an inspired bit of casting. Most of the talents involved came back for the third film: Barry Sonnenfeld as director, Walter Parkes and Laurie MacDonald as producers, Steven Spielberg as executive producer, Danny Elfman for the music, and the story based on the Marvel comic by Lowell Cunningham and an idea by Will Smith. That may be why it turned out to be that rare thing: a threequel that didn’t suck. Rick Baker returned to create the creatures, using inspiration from the B movies of the Sixties. When principal photography began, they only had a finished script for the first act.

The official MIB car for the Sixties was a 1964 Ford Galaxie. There were great songs from the Sixties to choose from. The first line of the young Agent K was, “We’ll take it from here,” which was the first line spoken by Tommy Lee Jones in the whole franchise. The zip-line escape system at the Apollo launches really existed, though it was never used in an emergency. The Twin Towers were under construction in 1969 but are not shown. On first hearing Josh Brolin’s impression of Tommy Lee Jones, director Sonnenfeld burst into tears of joy.

Tommy Lee Jones and Josh Brolin appeared together in No Country for Old Men. Like Star Trek: First Contact and X-Men: Days of Future past, the movie is both a prequel and a sequel. Will Smith wanted his son Jaden Smith to play the young Agent J, but the director disagreed. There were cameos from Rick Baker, Rip Torn, Jada Pinkett Smith, Tony Shalhoub, Howard Stern, Lady Gaga, Tim Burton, Bill Gates, Will Arnett, and Barry Sonnenfeld. Like Andy Warhol, it’s easy to believe that some of these people are aliens.